You could be forgiven for thinking that not much happened for Canmore Runner in 2017, beyond some spectacular runs earlier in the year in Annecy and Courmayeur with Canmore running sensation Fitzy. But contrary to the saying, “if it isn’t on [insert social media here], it didn’t happen”, just because I didn’t find the time to blog about it, doesn’t mean it didn’t happen. And for sure, 2017 saw some beautiful runs in and around Geneva, a quick trip back to Canmore, and one cracking ultra. So, in no particular order, here are some things that I didn’t quite manage to blog about in 2017… END_OF_DOCUMENT_TOKEN_TO_BE_REPLACED

Annecy, France. A mere 25 minute drive from Geneva, the “Venice of the Alps“, home to those gear gurus Salomon, and, it turns out, some spectacular trails.

Joined – all the way from Canmore – by Fitzy, my much missed running companion and leader of Canmore Trail Culture, our objective for the day was an 18km loop with, according to Strava, 2370m of climbing (not sure that’s right) up and over the summit of Mont Baron, on the east side of the beautiful (even on a grey day) Lac d’Annecy:

You can shorten this run by a good 5km if, unlike us, you choose to begin at or near the trailhead, rather than parking in town and running along the lake front. It seemed like a good idea when we arrived but a terrible idea two and a half hours later as I laboured back along the lake front. On Strava, it all looked like this: 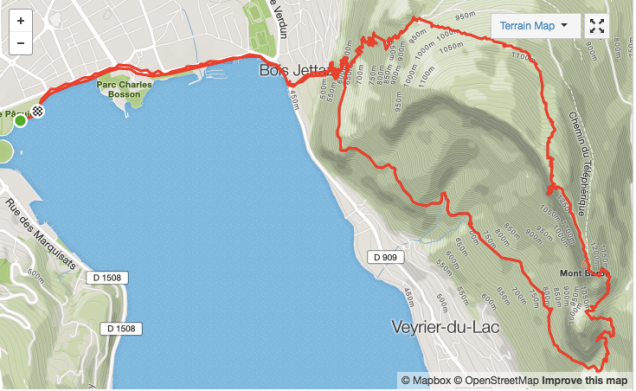 The trailhead is located just off the D909 which is the road that follows the east side of the lake heading from Annecy towards Veyrier-du-Lac. It’s reasonably well signposted:

..and the trailhead is quite obvious:

But if you are in any doubt, just look for this wonderful sight: Ecrin des Gourmandises Boulanger, right smack dab at the trailhead, with the most amazingly dense and delicious pain au chocolat aux amandes. This was surely shaping up to be a good day.

A word to the wise, however. Tempting though it will be, don’t stuff your face because from here it’s more or less uphill for the next 5.4km and the start is steep and rocky:

And it more or less continues like that all the way to the Plateau du Mont Baron. The route is relatively straightforward – just keep following the signs for Mont Baron and Mont Veyrier, of which there were quite a few:

The climb is a beautiful twisting affair, that takes you around the backside of the mountain with a few dips long the way to give you the chance to recover.

If we’d studied the map a little more carefully, we would probably have taken the steeper trail that heads off to the Col des Sauts and Mont Veyrier around 2.5km from the trailhead and from where you can run along a balcony to Mont Baron. But alas, we didn’t study the map carefully and headed to Mont Baron via the Creux du Loup. But I wouldn’t say we were disappointed. It was something of a winter wonderland:

You’re in the trees for most of the climb to the Plateau du Baron, which would probably be quite welcome in the heat of the summer. But you just know that the trees will give way at some point and spectacular things await and so they do. A mere 300m further on from the Plateau and the trail brings you to this:

From here, you keep heading along the balcony and the trail drops down a bit:

…before eventually delivering you in around 500m to the Ancien Telepherique:

From here, we took the trail down towards Veyrier-du-Lac which involves navigating a slightly steep and sketchy staircase, albeit with a great view:

At the Balcon des Contrabandiers, we continued to follow the signs for Veyrier-du-Lac which took us down a wonderful free flowing singletrack with lots of hairpins and chance to really open up the legs.

Rather than heading into Veyrier-du-Lac, we followed the trail that was signposted for the Col de Sauts and Mont Veyrier but later dropped off this and onto the trail leading to Chavoire and Talabar. This eventually put us back on the trail we’d started out on from the trailhead which, of course, led us happily back down to the boulangerie.