Welcome to the racing post! For the equestrian minded among you, apologies as I don’t mean this:

…so much as this…

Following a great start to the season at the Run&Skate race in Chamonix, i’m very excited about the prospect of racing in Canmore. It goes without saying that as a great trail running destination, Canmore and the vicinity (i.e., within a few hours drive) has much to offer in terms of racing opportunities, not least of all Rundle’s Revenge, Trailstoke, and the Grizzly Ultra. These are the three races that i’ve set my sights on for this season.

Rundle’s Revenge is a mountain bike and trail race on 27-28 June. There are various distances. For the “Kick Ass Bike Race” on Saturday you can choose from a 12.5km, 25km, 50km or 100km ride. The “Mountain Mule Trail Run” on Sunday offers four distances – 7.5km, 12km, 25km and 50km. There’s no requirement to enter both the bike and trail race but you can if you want and then you have the option of the Donkey Lite Solo (25km bike/12.5km run), Half Donkey Solo (50km bike/25km run) and Full Donkey Solo (100km bike/50km run). I’m sticking to the 50km trail run on account of, er, not owning a mountain bike…

The race takes place at the superb Canmore Nordic Centre, which also hosts the Grizzly Ultra and some of the 5 Peaks Series which i’ll come back to. The course map and profile are below. It consists of a series of 12.5km laps with 400m of climbing per lap, so 1,600m of climbing for the 50km run. I like the lap format as it makes it much easier to manage your nutrition and other needs during the race. There’s only one place, and better still it’s at the start/finish, where you need to leave a drop bag that contains all your extra gels, drink, and spare kit.

Next up is Trailstoke which is actually not in Canmore, or Alberta even, but a few hours drive away in the mountain resort of Revelstoke, British Columbia. It takes place on the last weekend of August. It’s organized by the 5 Peaks crowd and is described on the website as “one of the most challenging ultras in the world”. That’s quite a statement as there’s some very tough competition out there. That said, there is no disputing that it will be tough. The course covers 55km and is divided into three segments:

Umm. The elevation info on the Trailstoke website is given in feet and i’ve just converted it into metres for the three lines above and suddenly understand the enormity of the challenge ahead. It now seems so much more awesome – and intimidating – than it was 5 minutes ago. 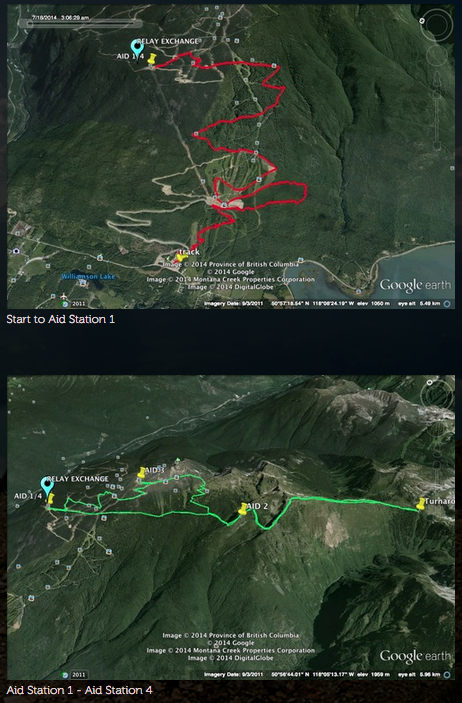 You can run Trailstoke as a solo runner, which is what i’ve opted for, or as part of relay team of 2 or 3 runners. Ms. Canmore Runner has wisely opted for the 3-person relay but will take on the knee knocking descent.

Trailstoke appeals for a couple of reasons. First, people say a lot of great things about Revelstoke and this seems a good opportunity to see the place for myself, rather than just passing through which is normally the case. Second, that’s one awesome course. A killer climb to start and then a spectacular, undulating, ridge run with incredible alpine views like these. It’ll be like being back in Switzerland, only with bears to worry about rather than cows. Unlike for races at the Canmore Nordic Centre, the carrying of bear spray isn’t mandatory at Trailstoke, just strongly recommended.

Finally, the Grizzly Ultra that takes place at the Canmore Nordic Centre on 11 October. The Grizzly will always hold a special place in my racing and running affections because it was the most incredible racing experience of my life to date and the first time i’d run as far as 50km. I finished in 6 hours 37 minutes and my goal this year is to come in under 6 hours which may or may not be realistic.

The Grizzly is composed of five legs of varying length and elevation gain that all start and finish in the stadium. They look like this (courtesy of the Grizzly Ultra website):

You can enter the Grizzly as a solo participant or as a 2 or 5 person relay. I’m soloing again this year and will be joined (and promptly left in the dust) by Ms. Canmore Runner.

A great feature of the Grizzly last year was that in the weeks leading up to the race, its director, Tony Smith, organized a series of Saturday morning runs that covered the different legs. It was very useful to get a sense of the ups and downs of each leg before the big day. Hopefully, he’ll do the same this year.

Also useful to know is that the weekend before the ultra, the Grizzly Mountain Bike Marathon and Relay takes place and covers the same course. The course markings remain up during the week between the two events so if you’re unable to make the Saturday runs, there is the opportunity to run some or all of the course in the seven days leading up to the ultra.

In addition to these three, other great racing opportunities in and around Canmore include the Central Alberta races of the 5 Peaks Trail Running Series from May to September. These include two events in Canmore, the first on 14 June (with races of 8km and 12km) at a location to be announced; and on 12 September at the Nordic Centre with distances of 6.8km, 14.5km and 21km.

Canmore is also home to the Canmore Rocky Mountain Half Marathon (and 5km and 10km) that takes place on 13 September in support of CAUSE Canada; and the Rocky Mountain Soap Company Women’s Run and Walk on 23-24 May in support of Rethink Breast Cancer. The event includes distances of 5km, 10km and a mountain half marathon. It’s clearly very popular as this year’s edition is already sold out.

There’s also the nearby Banff Marathon, Half Marathon and 10km run on 21 June. By the looks of it, it’s mostly on the road rather than trails but it does offer, as the website puts it, “one of the planet’s most incredible and beautiful running experiences, all in Canada’s first National Park.” That’s probably very true. Last but not least, and firmly back on the trails, there’s the Golden Ultra from 18-20 September in Golden, British Columbia. This is a whole other experience, consisting of a 5km uphill challenge, a 55km ultra and a 20km “flat, flowy and fun single track”, held over three consecutive days.

So, there you have it. I guess I should probably stop writing and start training. Rundle’s Revenge is only 16 weeks away…

Back again soon with some thoughts, well, preoccupations really, about wildlife. Until then, happy trails.