…there’s always the chance of a big surprise, like running into a bear. This, along with running in very sub-zero temperatures, is the other major adjustment i’ve had to make running in Canmore.

Months before we even moved to Canmore, I was fretting about the prospect of running where bears roam. I’d read and been told (with some enjoyment on the part of the storytellers) no shortage of horror stories of bear encounters that didn’t end well for the runner/human involved, and often the bear for that matter. I’d convinced myself that there’s a bear hiding behind every tree just waiting to pounce. And then the big day came to leave Geneva and while changing planes in Frankfurt I read this on Twitter: 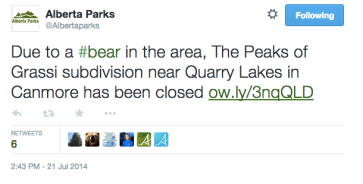 This would have been fine were we not about to move into a house in the Peaks of Grassi subdivision.

And then we arrived and my fear of bears was soon overcome by the stronger desire to hit the trails. Well sort of. For the first few months I stuck to more populated trails down by the Bow River and occasionally ventured onto the Powerline. But I avoided trails where I thought bears might lurk, like the Highline and those criss-crossing the Nordic Centre. I would only run those trails in the company of others (like at the Grizzly Ultra, in the company a thousand or so others) and with a can of bear spray to hand. Going for walks and hikes, i’d take bear spray and attach bear bells to the kids, though like most kids their age they generate considerably more noise than the bells and most aircraft.

It wasn’t too long before I realized this was bonkers and it was time to get a handle on my bear fears. That’s not to say that those fears are unfounded. This is bear country after all as the signs, like that in the photo above, or this altogether more humorous warning from Jasper National Park, remind us: 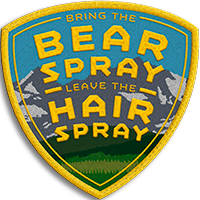 And people do encounter bears around Canmore. The closure of the Peaks of Grassi subdivision was prompted by a fortunately not too serious encounter between a birdwatcher and a bear near the Powerline Trail. And it’s not just bears. The school run is always more fun and interesting when we encounter coyotes or elk, as is often the case:

And on a much less positive note, earlier this year a Canmore local had the scary misfortune of running into a cougar in town.

But as dangerous as the possibility of an animal encounter seems, I didn’t want it to occupy my thoughts pre-run and while I was out on the trails. I didn’t want it to be all consuming to the point that it would stop me, and indeed was stopping me, from making the most of this trail running paradise. And above all, I didn’t want to pass any of that on to my kids. I don’t want them to grow up afraid of their surroundings. I want to them to seize those surroundings and take full advantage of the opportunities that exist.

This realization occurred in early November, just as the bears were heading to their dens and hibernation. But just as I began to breathe a sigh of relief and decided that I could now safely tackle the Highline, everyone started talking about the danger of cougar attacks as if this was something new. Yet cougars are around all year long, so why was everyone worried about them now? Why weren’t people talking about them while the bears were also around. On a scale of things that are going to get you on the trails, do bears rank higher than cougars, except when they’re hibernating? Clearly, there was only one thing for it. I needed to educate myself.

Ms. Canmore Runner was, as usual, one step ahead of me. Growing up in BC and Alberta, she has a far better and considerably more rational grasp of these things. That said, her refrain that: “I don’t know why you worry so much about bears. I’d be more worried about cougars, They stalk you.” was not always the most reassuring. But she also recognized the need to educate me and promptly bought me the truly excellent book Bears Without Fear by Kevin Van Tighem:

This has helped enormously in terms of increasing my understanding of bears, their behaviour and the steps that I can take to avoid an encounter. I’ve also learned that bears have quite a bit to fear about an encounter with me, in terms of the possible long-term consequences for them, such as death, further reinforcing the need for me to do all I can to avoid them.

Then there’s all the other problems they face, like poachers, the risk of being mown down on the Trans-Canada Highway, loss of habitat and such like. Interestingly, i’ve gone from fearing bears to fearing for their future. As much as I don’t really want to run into one, I recognize that they are truly incredible animals. Van Tighem’s book contains a great quote (at page 189) from another writer, David Petersen, which sums it up well: “We should work to save the grizzly, because it is power, passion and freedom embodied. It is our own worst nightmare and our most beautiful dream. It is wildness personified.”

Ms. Canmore Runner also bought me the equally aptly entitled book that i’ve mentioned before, Let Them Be Eaten by Bears by Peter Brown Hoffmeister.

This also helped to put things in perspective, not least that my fellow humans are a far more dangerous species and that hitting the trails and getting away from cars can make you quite a bit safer. Although no one has said as much, I have an inkling that it’s more dangerous for me to get in the car and drive from Canmore to Banff and back than to hit the Highline trail for two hours.

So, i’ve made progress on the bear front. I now understand that they’re not out to get me and are about as keen to see me as I am to see them. The key is to be cautious – pay attention to signs of bear activity such as scats, tracks, and digging. And make lots of noise. I tend to shout “hello bears here I come” at regular intervals and especially before blind corners. Running with others whenever possible is also a good idea, as is carrying bear spray and knowing how to use it (handy video here). And last but not least, it follows that one should obey warnings and closures.

At the same time, my understanding of everything else that’s out there and what I should do in the event of an encounter could use some sharpening. Fortunately, we’re lucky in Canmore to benefit from the WildSmart programme of the Biosphere Institute of the Bow Valley. This is a hugely useful resource for helping communities, as the name suggests, live smart with wildlife. There’s a wealth of information on the WildSmart website on living with bears, cougars and elks. WildSmart runs education and outreach initiatives for newcomers and locals, including the annual bear day (with Alberta Parks) which takes place this year on 11 April from 10.00-15.00 at the Canmore Civic Centre. There are also useful resources available on the Parks Canada website.

WildSmart also provides a weekly summary of bear activity in the Bow Valley. Its based upon a compilation of bear information provided by government agencies and unconfirmed sightings reported by the public each week. This is great for giving you a sense of where some bears are, or at least have recently been. You can also get regular updates from WildSmart on Twitter and Facebook. But as the WildSmart folk point out, bears and other wildlife can be encountered anytime, anywhere.

Hopefully not anytime soon or anywhere that i’m running, though I do at least feel more prepared and rational about all this. And that’s a good thing. Spring is upon us, the bears are waking up, and I have familiar trails to enjoy and new trails to explore – with caution but not fear.

I’ll be back again soon with another route posting. Until then, happy trails.