To mark the occasion, it seemed rather fitting to post a trail running route that celebrates one of the “shorter” mountains in the Bow Valley: Tunnel Mountain. Elevation 1,692m and runnable (up and down) in around 32 minutes (and i’m no speed demon)! But don’t be deceived. What Tunnel Mountain lacks in elevation and technical difficulty is compensated for with stunning summit views of Banff and the Bow Valley.

Known to the Stoney Nakoda people as the “Sleeping Buffalo” by virtue of resembling one when viewed from the north and east, it became Tunnel Mountain in 1882 after surveyors working on the Canadian Pacific Railway suggested routing a 275m tunnel through the mountain. While an alternative route north of the mountain was found for the railway, the name stuck.

A very popular trail with hikers in the summer months (not to mention local resident Anne Ness who climbed it more than 8,000 times over a 40 year period), the trailhead is located on St Julien Road (near the internationally renowned Banff Centre). From there it’s a 2.2km climb to the summit with some 250m of elevation gain – and a far speedier descent back down. On Strava, it looks like this: 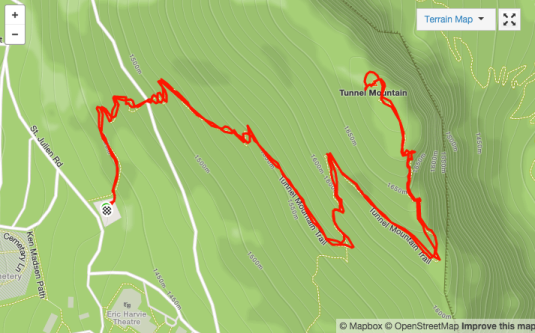 While the trail is neither steep, nor particularly technical, it’s an absolute pleasure to run (and is runnable in its entirety). But it’s the views from the summit that make this run so spectacular, even on a very overcast, flat light, iPhone-camera-challenging, kind of day:

Imagine what it looks like on a clear, blue sky, kind of day.

So, if you’re looking for something short with some very sweet views, check out Tunnel Mountain.

One thought on “Tunnel Mountain aka Sleeping Buffalo”