Heart Mountain Loop. A steep, unrelenting, hands on scramble, followed by an undulating and spectacular ridge run as you gradually make your way up to and beyond the summit of Heart Mountain. And then a steep, technical, rocky descent that eventually gives way to an equally steep but more forgiving single track through the trees that gradually flattens out as you head back to the trail head. It’s only around 10.4km but that comes with more than 1,000m of elevation. It’s quite the workout. 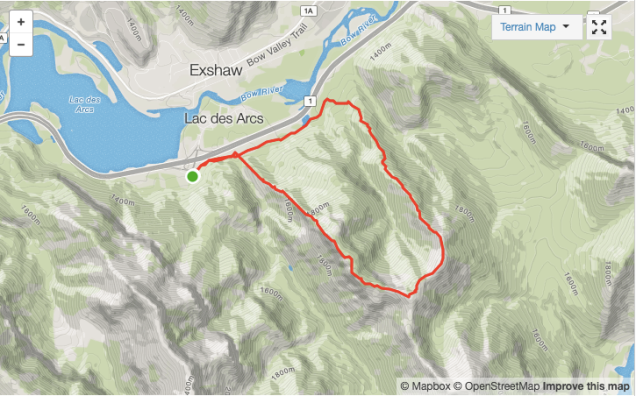 The run begins at the Heart Creek trailhead, located 15 minutes east of Canmore, along the Trans-Canada Highway.

The trail begins with a gentle uphill and then a nice little descent to Heart Creek. Rather than taking the trail that heads up the creek, follow the trail off to the left that signed for the scrambler’s route:

And start scrambling. Indeed, for the next 1.8km or so, it’s straight up. No nice gentle switchbacks. Just straight up:

Of course, the advantage of that is that you gain elevation extremely quickly. The downside is that it hurts. But the pain doesn’t last forever and the views on either side and behind you are fantastic and make for perfectly good excuses to stop, take it all in, and let your heart rate calm down:

There is one section of the climb (at around 2.16km) where you’re confronted by an imposing wall of rock. There is a small red square with an arrow painted onto the rock which indicates that that’s the place to climb up the rock. We found it easier to climb up the wall about 10 meters to left of that sign.

The grind continues for a while longer yet but then quite unexpectedly, at least that’s how it felt, you emerge on to the ridge:

From here it’s a superb, undulating run over a serious of false summits before you eventually reach the summit of Heart Mountain:

From the summit, take the trail that drops down in a north-easterly direction (towards Yamnuska), initially through a clump of trees, and follow this along the ridge and over a couple more false summits for the next 800m or so:

Eventually, after the final false summit above, the trail begins its long and slightly grinding, quad-killing descent over rock at first…

…and then down and along superb, twisty, root strewn single track through the trees.

After around 8 km you’ll come out onto a wider trail that runs east-west and parallel to the Trans-Canada Highway. Follow this to the left (west-bound). After a short time it turns into a reasonably straightforward single track that takes you back to Heart Creek. From there, retrace your steps back to the trailhead and begin the task of getting your quads to stop shaking.

Thanks to Fitzy for the great company.