Two hours 59 minutes earlier, as I toed the starting line for the 25Km version of the Broken Goat, I hadn’t anticipated that those would be my first words after crossing the finish line. Nor had I anticipated that I would say them to the race director, Rene Unser, as she hugged me, pom-poms in hand. But that’s what happened. And I meant it. I had just taken part in the best race ever. And I’d just run my best race ever.

Held at the Red Mountain Resort in stunning Rossland, BC, and part of the Pace Trail Series, the Broken Goat is an exceptional mountain race. It consists of challenging 12km, 25km and 50km routes that mostly follow the superb undulating single track of the Seven Summits high alpine ridge trail. And it’s all set against the stunning backdrop of the Kootenay Rockies.

I’d originally entered the 50km race but sensibly, if begrudgingly, dropped down to the 25km distance after sustaining a calf strain at the end of May. This injury curtailed my running for close to four weeks except for some aqua jogging which, as useful as it is for retaining some fitness, is not the most fun you can have in a swimming pool.

Any regret that I harboured at not running the 50km soon dissipated, however, as the 25km race did not disappoint. The course was truly spectacular. On Strava, it looked like this: 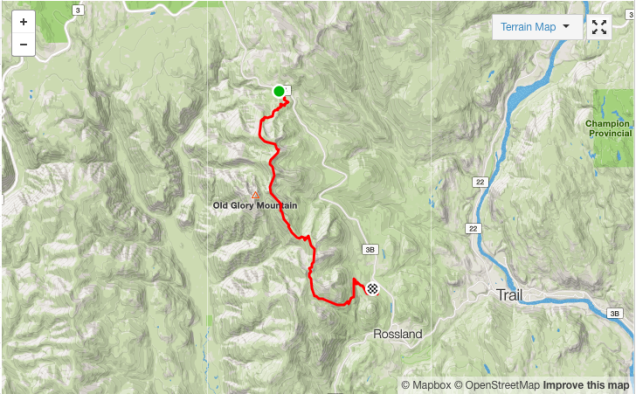 Both the 50km and 25km courses begin at the Seven Summits trailhead, a 15 minute bus ride from Red Mountain Resort. From there, the trail rises gradually for 7km along some fabulous single track that passes in and out of the trees and alternates between rock, dirt and some muddy spots.

Once you pop out on the ridge the fun really begins as you head along a further 6.5km of undulating single track that follows a mostly downwards trajectory and offers spectacular and panoramic views of your surroundings:

This is followed by a roughly 2km climb up some relatively smooth switchbacking single track after which it’s more or less downhill to the finish. There’s a brief climb around the 17km mark after which it’s a super fast – and loose, rocky and quad-crushing – descent along a service road. This gives way to a final 3km stretch through the trees along some superbly soft, dirt-based mountain bike trails:

And then you pop out of the trees for the sprint to the finish line where each and every runner was greeted, hugged and congratulated by a pom-pom wielding Rene Unser:

So, what made this the best. race. ever?

The course is challenging for sure, but it’s also fast, stunning and fun. At no point in this race did I think to myself, “when will this be over?”. That thought has entered my mind in some other races, including of a similar distance to the Goat. And it almost always enters my mind when I run road half marathons. But not with the Goat. I was having a spectacular day in the mountains. To begin with, the climb was largely runnable and when it felt like it wasn’t and it was time to hike, there were some awesome fellow-runners to chat with. This was followed by a ridge run that was fast, twisty, technical and thoroughly enjoyable – and that offered incredible views. Everywhere you looked you were reminded of how mountains can be both incredibly beautiful and strangely daunting at the same time. I was having so much fun and felt so good that at the 6.5km mark I decided to actually “race” rather than mosey along at my usual “race pace” that involves lots of walk and photo-breaks. I was seized by the idea that I could finish in under three hours and that that was a goal worth aiming for – and ultimately attained with a massive 22 seconds to spare.

The organization was first class and extended to all aspects of the race and not just the race itself. Number pick up was a breeze, and Red Mountain Resort provided excellent, running appropriate and relatively inexpensive pre- and post-race meals which also provided a good opportunity to socialize. And I loved that Red Mountain were wise to the fact that carnivores frequently eat the veggie option and the veggies end up with salad. They were totally policing that and, as a veggie, I thank them for it!

The race briefing was informative, amusing at times, and seemed to cover all the bases, as evidenced by the relative lack of questions at the end. On race day, bussing a few hundred runners 15 minutes down the road to the start line seemed to pass without incident thanks to very clear instructions on the website, on Facebook and in pre-race emails. The buses left promptly and arrived at the start in good time to complete the mandatory pre-race gear check.

The course was very well-marked. There were a couple of moments when I wondered if i’d missed a turn but those were short-lived as another red pin flag would appear and confirm that I was on the right track. There seemed to be some confusion as to the location of the first aid station. We were told it would at the 12km mark but it seemed more like 17km. This wasn’t a problem for me as i’d packed enough gels and liquid to last the race but it might have been for others.

The volunteers! All the volunteers I encountered were helpful, friendly, encouraging, and supportive. And some of them spent the race in exposed locations in some occasionally dodgy weather. Volunteers, as always, I salute you!

The vibe. Rene Unser’s created something truly unique with the Broken Goat. The vibe around the whole weekend was really very special. It’s a hard thing to distill into words but here goes…

There was a tremendous sense of community. The majority of racers spent a lot of time together, before and after the race. The pre- and post-race meals (and the resort bar) brought people together, prior to the race briefing on Friday and the prize giving on Saturday. There was time to mingle, chat, meet new people, see old friends, catch up with people that you’d met for the first time on the trail, exchange stories, etc.

The sense of community also manifested itself in the broad understanding that while we’d all turned up in Rossland with our individual goals for race day, we were all in this together; that given the challenging nature of where we were running, our primary consideration should be to look out for each other. This is in many ways the essence of trail running and Unser made sure it was front and centre at the Goat, including during the pre-race briefing and again on the start line. There was even the promise of free entry to next year’s Broken Goat should you sacrifice your race to help another racer in need. Nice touch.

There was a very real sense too that the broader community of Rossland was behind the race and that this race and our enjoyment mattered to them.

There’s a lot of local support and sponsorship for this event and there were great speeches at the prize giving from the Mayor of Rossland, and representatives of Red Mountain Resort, the Rossland Beer Company, and a local branch of Grant Thornton. They were heartfelt, welcoming, supportive and respectful of what everyone had achieved on the day.

And then there’s Rene Unser. I don’t really know Rene and what I do know about her comes from the glowing testimony of others. But there was a personal touch that really left it’s mark on the race and the overall experience. Again, a difficult thing to put into words but there was, for example, the humorous, light-hearted yet professional race briefing – including the reminder that if you drop litter you’ll be banned for life and Unser will tell your mum. There was the hugging of each and every racer at the finish line (not to mention her chasing some of the 50km runners up the final climb on Red Mountain to offer encouragement); and there were the brilliant race medals and wine goblets hand-crafted by Unser herself:

Last but not least, there was also a vibe within the vibe that I want to mention. There was a large contingent of Canmore-based runners at the Broken Goat, many of whom run regularly with Canmore Trail Culture and all of whom turned out great performances on the day, including some podium and top 10 finishes. It’s wonderful to be part of that group; to have that network of friendship, support, encouragement and experience, not just at the race but all the time. For that, we are as a group truly indebted to Fitzy.

So, would I do the Broken Goat again? Absolutely. This was a truly fantastic and unique race experience in so many ways. Would I do the 25km again? I would, because it’s an awesome, challenging course and, as several racers pointed out, you get most of the same amazing views as the 5okm runners but without the further 25km of running (and additional 1400m of climbing). But, that said, when I do return it will be to take on the challenge of the 50km. The 25km Goat didn’t break me and left me wanting more. Let’s hope the 50km doesn’t break me either and i’m still smiling at the end of it:

One thought on “Broken Goat: Best. Race. Ever.”