Sulphur Mountain, 2,451m elevation and, it turns out, a total treat. I hadn’t expected it to be thus. This was never on my ever-burgeoning list of “must-do runs”, partly because of its status as one of Banff’s major tourist attractions. Every summer, thousands of tourists take the 8-minute gondola ride to Sanson’s Peak, or hike there from the Upper Hot Springs along a series of switchbacks that wind their way up beneath the gondola. Of course, there has to be a reason why it’s so popular and it might just be the “breathtaking vistas in every direction” and the “stunning bird’s-eye view of six incredible mountain ranges”. As luck would have it, you can still enjoy those same vistas while mostly avoiding the masses en route by taking an alternative and challenging 8km trail to Sanson’s Peak that begins at the Cave and Basin historic site.

That’s not to say that the shorter trail from Upper Hot Springs isn’t worth running. According to Canadian Running magazine the altitude and elevation of the 5.3km trail “make it a good fitness test for many of Canada’s elite endurance athletes; however, it has a relatively mild gradient, making it a safe and rewarding peak for novice mountain runners.” But choose your time carefully. I ran down it on a very wet and cold Saturday morning in August and it was still congested with people making their way up.

To begin and end your run at the Cave and Basin would make for an approximately 18-19km loop, mostly on trail but with some paved sections at the beginning and end. That was my goal when I set out on the run but increasingly heavy rain, dropping temperatures and the tempting prospect of coffee and muffin at the Wild Flour Bakery saw me end the run at the 17km mark which happily coincided with top of Banff Avenue. On Strava, the route profile looks like this: 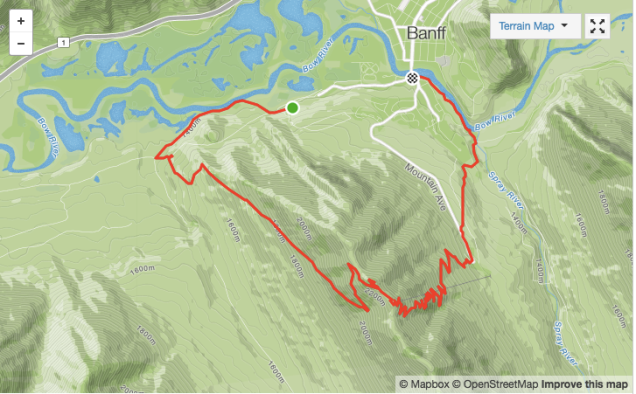 The Cave and Basin Historic Site is located at the west end of Cave Avenue, on the outskirts of Banff. It’s the birthplace of Canada’s National Parks and, geologically speaking, the lowest component of nine sulphurous hot springs clustered in three groups on the northeast flank of Sulphur Mountain. It’s well worth a visit, even if it is, according to my kids, “really stinky”:

Follow the path that runs to the right of the Cave and Basin building and which takes you directly to the Sundance Canyon trailhead:

Continue along the trail which, it must be confessed is paved but (a) you’re only on it for the next 2.2km; (b) it’s generally heading downhill; and (c) there are some beautiful views along the Bow River to take your mind off your aching knees:

At the 2.2km mark, look for the trail/service road that heads off on the left and is signposted for Sulphur Mountain (while also keeping a close eye out for horse crap, of which there’s quite a bit as the Banff Trail Riders regularly come up this way):

And let the climbing begin. That’s it, no more flat for the next 6km. And no more pavement either – just some good, rocky, trail. It’s steep and bendy to begin with:

After a couple of minutes you’ll reach this intersection:

Rather than bearing left, as I did only to have to double back, say goodbye to the horse manure and follow the seemingly less-used trail that continues straight ahead of you. Put your head down and run when you can and hike when you have to. At the 3km mark, the trail swings left and the terrain opens up to reveal some great views back across the valley:

After a few hundred metres the trail swings right and then goes literally straight up, albeit reasonably gradually, for the next 3km, with some wonderful views of the Sundance Range and Mount Bourgeau along the way:

At the 6.6km mark, you’ll reach the first of two switchbacks, left and then right, that eventually deliver you to a boardwalk:

Follow the boardwalk to the left and continue onwards and upwards to Sanson’s Peak – named in 1948 after Norman Sanson who spent 30 years attending the weather recording equipment. If the weather is on your side, it’s now time to savour those breathtaking vistas and six mountain ranges. And if it’s it’s not, the views are more like this – though still fantastic in their own way:

Follow the boardwalk back but this time continue to the gondola terminal. There’s a cafe inside if you feel the need. If you don’t, skirt around the outside of the building to the right and then pick up the 5km switchbacking trail down to the Upper Hot Springs:

This is a great descent. Fast and reasonably soft underfoot, a little rocky in places. A great opportunity to open up the legs after 6km of steady climbing. Unfortunately, there are no photos of the descent as my iPhone was soaked and ceased to operate.

The trail brings you out at the Upper Hot Springs car park. Depending how you feel, this could be a good place to end the run as there are buses from here into town. Otherwise, you could continue in the direction of town, heading down Mountain Avenue. A short distance past the Rimrock Hotel, take the marked hiking trail on the right that will lead you down some soft singletrack and eventually to the Banff Springs Hotel and the spectacular Bow Falls.

Once at the Falls, follow the trail that heads upstream along the Bow River and passes under the Banff Avenue road bridge and eventually delivers you back to the Cave and Basin. Or, you can do as I did, and take a sharp right at the road bridge and retreat to the Wild Flour Bakery to rest and caffeine-up.