After a relatively early start, this year’s racing season has been an undulating affair and not just in terms of the topography. It began with the Torgon Trail in May, intended as a gentle start the season, followed in June by the Scenic Trail, which lived up to its name. Two weeks later, it was off to Chamonix for the Mont Blanc Marathon. Between them, there were some highs, a courageous comeback, a truly spectacular low, and some important lessons learned. 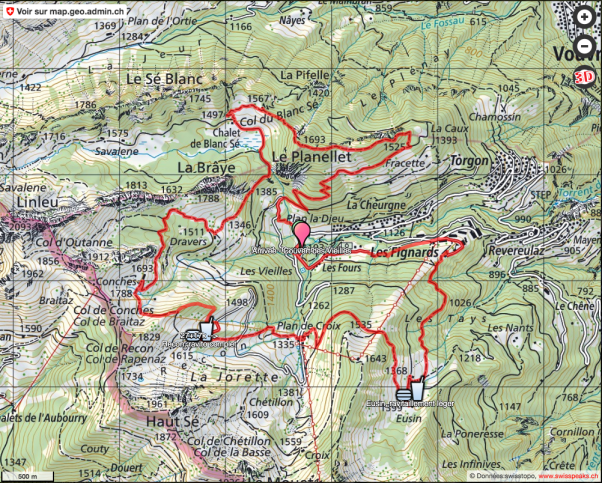 In the event, it wasn’t so gentle, and that unassuming profile hid one or two surprises.

Yet, it all began so well. It was the first race i’ve done in a long time that didn’t begin before dawn but at a more civilized 9.30am. Moreover, the first kilometre was downhill. And when the climbing did begin, it was relatively easy going, passing bemused cows and beautiful Alpine pastures:

The descent to Plan de Croix passed in the blink of an eye before heading up to Djeu des Tetes at 1726m, the high point of the race. The descent through Dravers did not pass in the blink of an eye. It presented an encyclopaedia of trail conditions beginning with snow and slush, followed by deep mud, giving way to a mix of rock and grass, before dropping down to steep, rooty and slippy singletrack with rock outcrops that claimed a few victims.

Then it was off on the final climb to Le Planelet. This began innocuously enough, along a rocky service road before switching to muddy single track. It was when we entered the trees that the trail began to rise steeply. While the summit I longed for arrived eventually, the nice flowing descent I was in the mood for was nowhere to be seen. Rather, there were short, steep drops over rocks, roots and mud. Progress was slow and jerky, and my quads burning. Eventually, the trail levelled out before delivering us onto a fast descent through the trees along soft, almost bouncy, dirt trail punctuated by switchbacks. Then it was a final kilometre or so of tarmac to the finish line. I clocked in at 3.03 which felt pretty good, even if I had aimed to finish in under 3 hours.

The story of the day, however, was the courageous and stunning return to form of Ms. Canmore Runner. Almost a year to the day that she began her cancer treatment, and due to hard work on her part and the support of the physio team at Hopital de la Tour, one of whom joined us for the race, she crossed the line in an amazing 2.30. She also took first place in her category. She’s a classy act.

Two weeks later, we bundled the kids and Grandma into the Volvo and set off for Tesserete in the stunning Ticino region of Switzerland for the 27km Scenic Trail:

Even with 2200m of elevation, the website cheerfully states that the distance “can be overcome with ease with a minimum of training.” I guess it depends how you define “ease” and “minimum”.

Although the route had some dips along the way, we were essentially climbing for the first 20km to the high point of the Gazzirola at 2116m. But the trail wasn’t too technical and a good 12km of the race was in the alpine with stunning views: 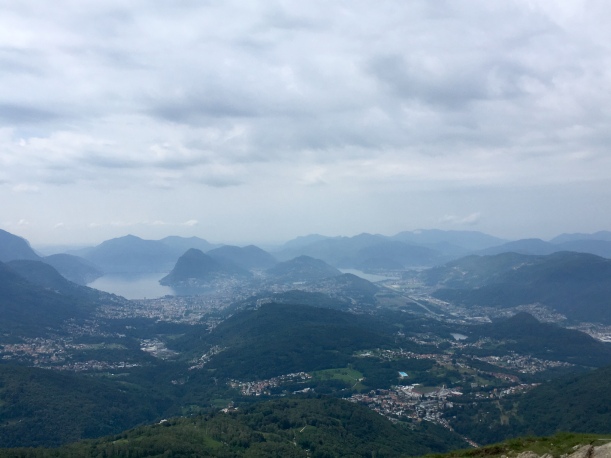 The decent from Gazzirola to the finish in Bogno was reasonably flat and technical to begin with but I hammered the last three kilometres in the hope of finishing in under 6 hours. This I managed by the skin of my teeth, crossing the line in 5.58. Meanwhile Ms Canmore Runner turned in another superb performance, coming in in 5.07.

I left Ticino feeling confident about the next challenge, the 42km Mont Blanc Marathon: 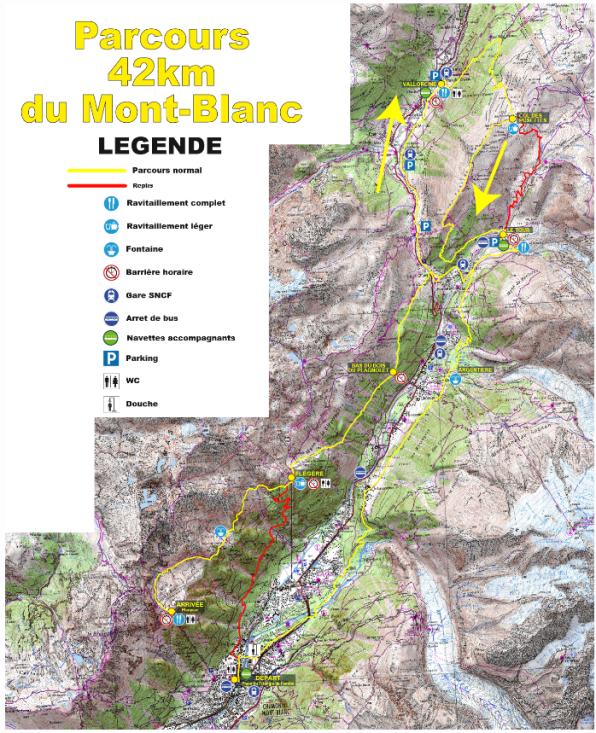 I love running in the Chamonix Valley and this was a race I’d been wanting to do since 2011, after I’d completed the 23km du Mont Blanc, my first major trail race and real pivot point in my love of trail running.

I felt in good shape and, post-Scenic Trail, was less daunted by the 2780m of elevation gain. My confidence was also boosted by managing, a few weeks earlier, to reconnoitre the first half of the race, from Chamonix to Vallorcine and up to the Col des Posettes. Finally the race weekend arrived, along with the first of this summer’s incredible heatwaves. This was, it turned out, to be my undoing.

The race started well. I made good time along the largely rolling trail to the fiesta that was Vallorcine and onwards to the Col des Posettes and the Aiguillette des Posettes, the high point of the race at 2201m. It was on the very technical and steep descent to Le Tour that things began to go awry.

First, my planter fascia, which has been giving me grief for several months, blew up to the point that running on my right heel was extremely painful, dramatically slowing my progress to the aid station at Le Tour. It was also at this point that the heat was beginning to make an impression. It forced me to leave the boiling aid station and find a shady spot on the trail to take stock of the situation and, with my plantar fascia feeling like it was, consider my next move.

My next move was to get going in the knowledge that once I started the climb up to Flegere and, ultimately, the finish at Planpraz, the pain would largely dissipate even if there was some discomfort on the short descents along the way. As I began the climb from Tre Le Champ it soon became apparent that my plantar was the least of my problems.

By now the heat was kicking in, despite the shade offered by the trees. I was beginning to experience mind blowing cramps in my calf muscles and feet and was forced to take regular rest stops at the side of the trail. At one point my left calf muscle contracted to such an extent that my leg was completely, if momentarily, deformed. In my tired state, it took a while for me to realize that while i’d been careful to keep up the fluids, I’d made the elementary mistake of relying too much on plain water at the expense of sufficient electrolytes, hence the cramping. I sought to correct this by cramming down some gels and mixing up a batch of Skratch Labs but by now the damage was done. Meanwhile, snapping one of my poles only made the climbing harder.

I continued to Flegere thinking that by now I would be outside the time limit and forced to stop – and the misery would end. But as I approached the aid station, volunteers and spectators were yelling at me to get going, that I could make it through the cut off. Unable to resist their calls, I upped the pace and passed the time barrier with about 20 seconds to spare. This was a mixed blessing as I now faced the prospect of a further, probably gruelling, 5km to Planpraz, reasonably sure that I would finish outside the 9.30 time limit. I was right on both counts.

It took me almost two hours to reach Planpraz. Any cooling mountain breeze that there had been was now gone, and the going was slow, hot and uncomfortable. At one particularly low point, I collapsed at the side of the trail, my legs and feet seized with intense cramp, my head spinning, and my stomach churning with nausea. I lay there for a while, contemplating the day, life more generally, and my immediate options. After some much needed encouragement from one of the race volunteers, I hauled myself up and gingerly walked the remaining 500m to the finish. It wasn’t pretty, I was outside the time limit, but I finished. In 10.15.

It wasn’t the most fun i’ve had in the mountains, but I learned some important lessons that I will take with me to the next racing adventure: September’s 55km Trail des Patrouillers in Crans Montana. On the plus side, I got to enjoy some truly magnificent views… 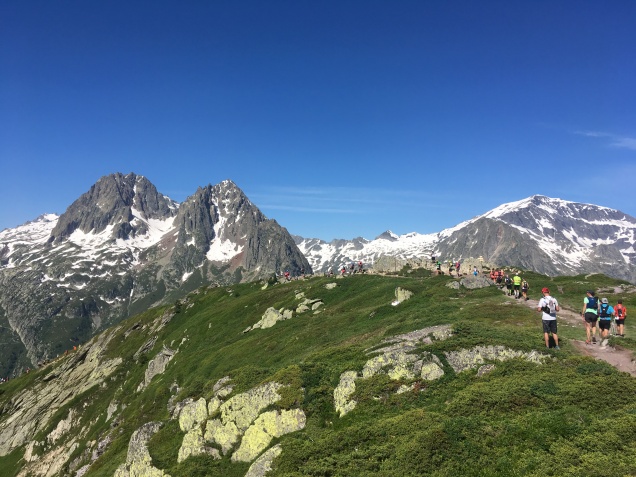