It seems I owe a lot to the Seven Summits trail race or “Trail des Dents du Midi”. Not only was it an awesome if gruelling experience which I may or may not put myself through again. It also introduced the Canmore Runner family to the sheer beauty of the Val d’Illiez and the fabulous postcard perfect village of Champery in the Valais, Switzerland. In fact, we liked Champery and the surrounding area so much that, to paraphrase Victor Kiam, we bought the place. Okay, we maybe didn’t buy it so much as keep coming back and rent a small apartment in town.

Our primary motivation was to use it as a base for skiing. Champery is one of the 12 resorts that make up the extensive Portes du Soleil ski area – a network of 286 ski runs that straddle the French-Swiss border – the world’s oldest cross-border ski destination no less! But beyond the skiing, Champery also provides a superb base for trail running, including but by no means limited to the Seven Summits race route. 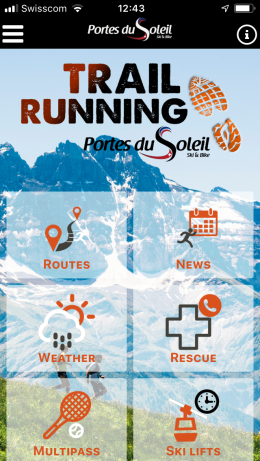 This lists 48 trail running routes that cover more than 400km of trails. The app includes route maps to keep you on track while the routes also have dedicated signposts: 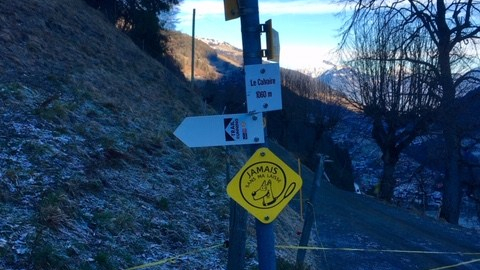 The app also gives you access to the weather, emergency numbers and the opening times of the different ski lifts in the area.

Even without the app, the possibilities to keep yourself amused on the trails are almost limitless. Switzerland boasts what is surely one of the best marked and connected trail systems in the world. With 60,000 km of marked trails (compared to 71,400 km of roads, and 5,100 km of railways), there’s an abundance of choices for hiking, walking and running trails.

Moreover, navigating the trails is straightforward due to the uniform system used to mark and differentiate trails. About 50,000 signs and trail markers indicate the difficulty of the trail, its final destination, and the time estimated to arrive there. Yellow signs, often in the shape of a diamond, indicate a pedestrian or walking trail; red and white signs or paint marks on trees and rocks indicate a hiking or mountain trail with more significant elevation gains and losses than a pedestrian trail; and blue signs indicate technical alpine routes and require additional safety equipment. In winter, magenta signs are used to indicate snowshoeing and winter hiking trails.

Hundreds of these signs are dotted around Champery and the Val d’Illiez, beginning with this handful, in the village centre… 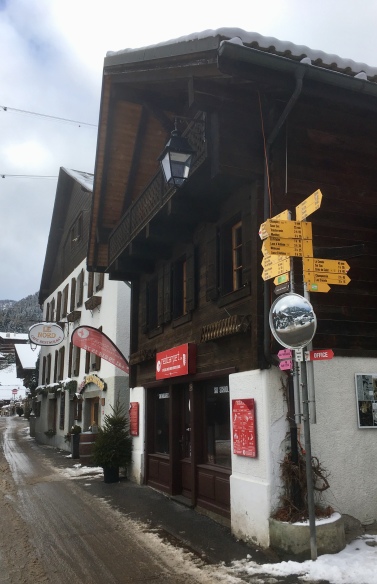 In addition to the trail running app, many of the snowshoe and winter hiking trails have been compiled in this handy pocket size guide: 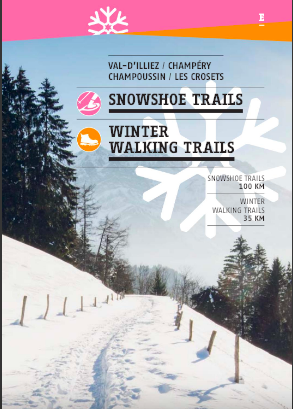 It contains maps, elevation profiles and directions for 100km of snowshoes trails and 35km of walking trails and can be obtained from the tourism offices.

Last week’s absence of snow on the lower slopes meant I was able to take advantage of the riverside trails along the valley bottom: 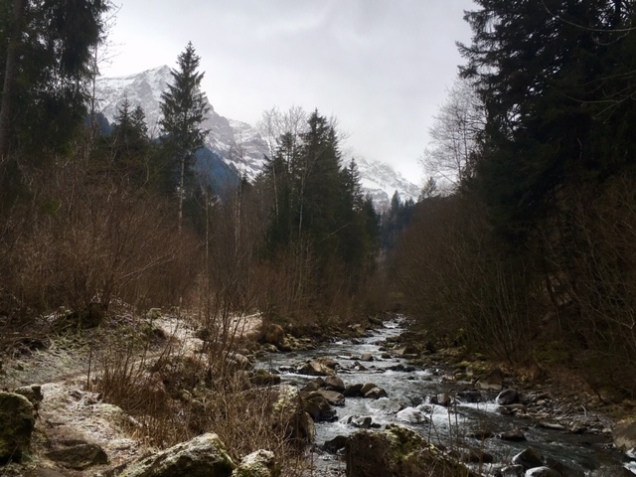 …while also meeting January’s Strava Elevation challenge, and getting in some vertical up the “very steep path” towards the Croix du Culet… 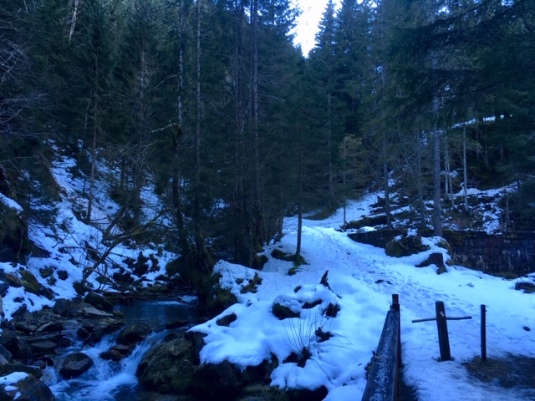 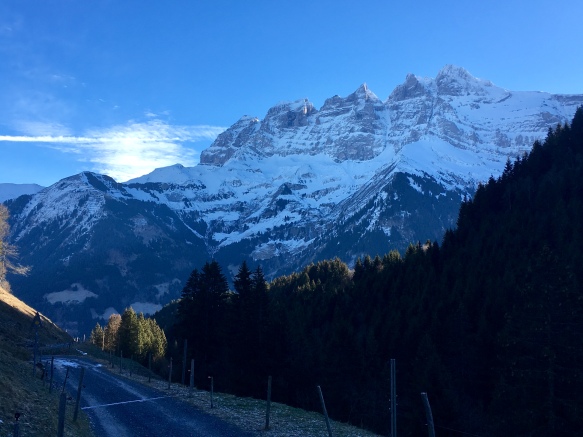 Since last week, the snow has thankfully returned and many of the trails are now out of sight and out of bounds – though not the riverside ones which threw up all sorts of delights earlier today: 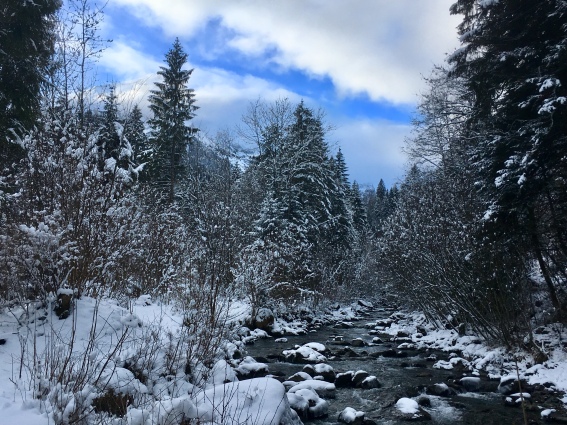 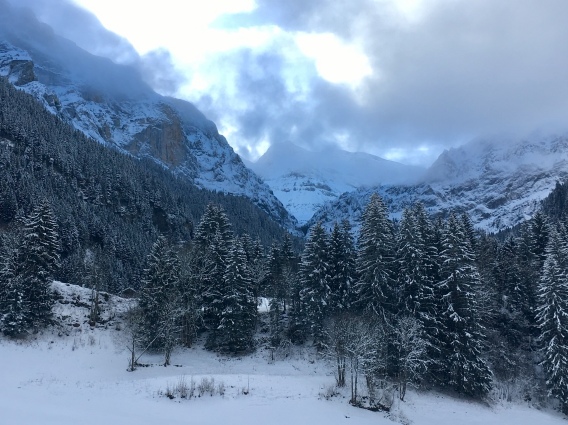 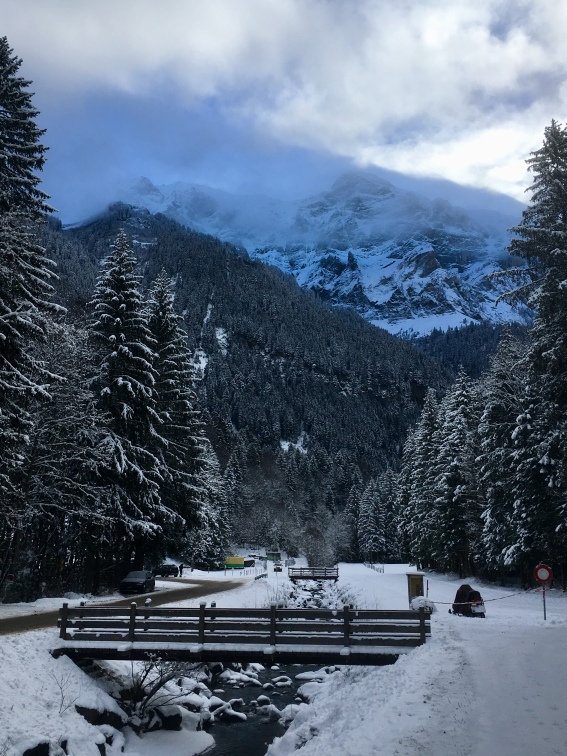 For the most part though, and to the delight of the rest of the Canmore Runner family, back to the skis it is. And the running snowshoes of course…