Depending on how much you follow trail running, you might have noticed that there’s a lot of talk about “FKTs” or “Fastest Know Times”. As an article last year in Outdoor magazine put it: “A growing number of trail runners are finding a new way to test themselves, and it doesn’t involve race fees, bibs or finish line chutes.” Instead, trail runners are “enlisting their own stopwatch, navigational prowess, and determination to set trail fastest known times. They pick a route, decide whether they’ll receive help in the form of food or aid along the way, and try to cover the distance as fast as possible.”

A quick glance at the Fastest Known Time website reveals that FKT routes are to be found in all corners of the world. Kilian Jornet’s “summits of my life” project is possibly the most systematic attempt to establish FKTs for the ascent and descent of “some of the most important mountains on the planet”, including Mont Blanc, the Matterhorn, Mount McKinley, Acongagua and Everest.

When it comes to FKTs and Canmore, it’s all about the Canmore Quad. True, it’s not Everest. But it’s hardly a walk in the park either. The Canmore Quad consists of running up and down the four peaks that dominate Canmore – Grotto, Lady Macdonald, East End of Rundle (EEOR) and Ha Ling. And you have to travel between the trail heads for each climb on foot. No bikes or cars allowed. It amounts to around 53km of running, with 4,892m of ascent and looks like this (on Strava): 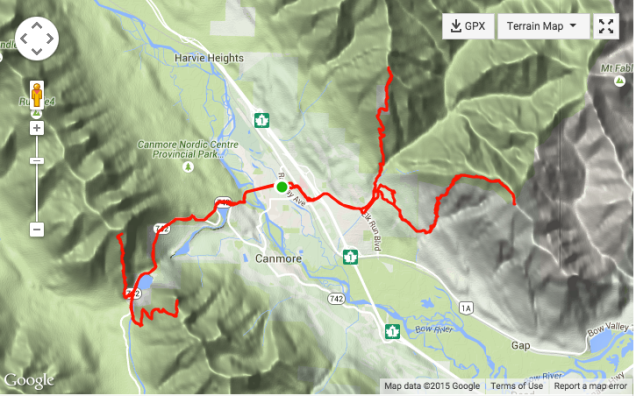 For the truly masochistic, there’s also the possibility/insanity of doing the double – as recently completed in July 2018 by Jeremie Philibert with a time of 25 hours and 49 minutes.

The current FKT for “just” the single was set by Ryan Atkins on 3 September 2015 (announced on Facebook), an incredible 9 hours 14 minutes, beating his previous time of 9.19 set in August 2014. This is a truly monumental effort but those that came before him were hardly taking it easy.

My research came up with the following Canmore Quad “hall of fame”, though no doubt there are others – and surely more than one woman?:

These times are all the more impressive when you consider that Lady Macdonald, Grotto, Ha Ling and EEOR are all mountain summits over 2600m, with steep rocky approaches. Lady Mac can be particularly challenging. As Andy Reed says: “Lady Macdonald is a pretty innocuous summit when viewed from Canmore but when you hit the final approach to the summit it becomes a knife edge ridge, with airy and precarious scrambling needed… In one spot I had one leg either side of the ridge, it was so narrow.” Reed’s FKT predecessor, Phil Villeneuve, described the approach to the summit of Lady Mac as the “scariest moment” of his successful FKT attempt: “I definitely felt out of my comfort zone as I clung onto the edge with both hands, feet half dangling over a massive cliff, trying to find an edge to step on. I had a few moments where the wind was howling so hard I had to stop to hang on.”

Another local runner Simon Donato, who holds the FKT for the Canmore Quad in winter – an impressive 14.39, achieved in February this year – has come up with some useful rules to guide attempts at the Canmore Quad FKT:

So, is the Canmore Quad in my running future? I know I wouldn’t stand a chance of coming close to some of the more recent times for this, let alone the FKT. The “slowest known time” perhaps, but certainly not the fastest. But does that put me off? It certainly doesn’t lessen the appeal of taking on this particular challenge. Merely finishing would be a massive accomplishment by any standard. And seeing these four peaks every day, towering over Canmore, it’s almost as if they are taunting me to have a go. I think I might. And if and when I do, you’ll read about it here on Canmore Runner.